On the Shelf - "The Joy of Cooking" 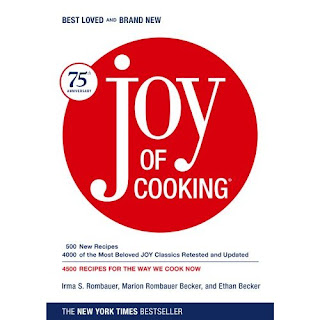 When I first started learning to cook, recipes came in one of three places - handwritten recipe cards in a number of well worn magnetic photo albums (where most of mom's best cookie recipes still are), the back of the product package (Rice Krispies and Nestle Toll House Morsels were the two biggies here), or a cookbook.

Today the proliferation of cookbooks, online recipe collection websites, and just great "word of blog" recipes is almost overwhelming. Nevermind almost - it IS overwhelming. It's also a treasure trove of yummy goodness.

Our cookbook collection is not huge - at least not by Matt's mother's standards - and some books are referenced more than others - but as the infrequent-cooking member of this blogging trio, I thought I would bring you the occasional book review, proven recipe - or even some of the droolicious recipes we've read about but not yet tried.

So grab your cuppa - here we go with our first one.

"The Joy of Cooking"

WOW - this book has been around for 75 years now!!! And to be honest - some of the recipes in it read "old fashioned" - but they have been doing an awesome job of keeping it up to date and relevant.

I will admit that I have not made many full "recipes" from this book - but it is an awesome reference on "how to use" a lot of ingredients. Had a sudden windfall of brussel sprouts? This book will tell you how to prep them for cooking. Need to boil an egg? You'll get a clear explanation of soft and hard boiling, as well as poaching and all sorts of other things to do with eggs.

Tried and tested. Dependable. And thick enough to make a good booster!
This one gets a five spoon rating on my scale of must have books.
Posted by Regina at 6:00 AM

Email ThisBlogThis!Share to TwitterShare to FacebookShare to Pinterest
Labels: cookbooks