Our latest challenge on Any Ideas for Dinner was The 50 Mile Circle. Competitors were asked to create a meal using primarily ingredients from within 50 miles of their homes.

This was a hard-fought match between our two contenders: Matt's Upstate New York Memorial Day Cook-Out and Bill's Locavoracious Bostonian Cuisine. Unlike Round 2 (where I was soundly defeated), there was no clear winner, so I decided to break it down into highly scientific and quantifiable categories*


*Not at all scientific.

So, this leaves us with a tie on the super-scientific scorecard. Way to go, science. Pah! I guess this comes down to my own judgment, then!

The lobster-stuffed uber-ravioli with handmade herb-pasta were certainly impressive and mouth-watering. Matt's Memorial Day cookout complete with grilled sausage, potato AND pasta salad, and finished with that rhubarb tart made me wish I had been eating that on my own back deck. Those who know me well enough would think the use of mushrooms in both of Bill's dishes would dock him some points -- well, I've grown to like mushrooms a bit now!

In the end, by the very narrowest of margins, I hereby declare Matt the winner of Challenge 3. (Give your rhubarb tart a thank-you...)

(This was some seriously tough competition. The bar keeps getting raised)
Posted by bobbyc at 9:24 PM 2 comments:

It's a Memorial Day Cook-out! 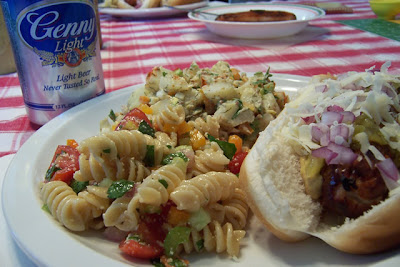 Now THAT’s my kind of challenge! We have trying to eat as local as possible, and given the weekend of this challenge, there was only one way to go:

COOK-OUT!
Heck, the great American cook-out originated in Western NY. From "real" hot dogs and classic mustards, to fresh salads and canned beer, nothing says "Honey! Hold onto the tater salad, I'm firin' up the grill!" like a traditional cook-out.

So go set up the sprinkler on the lawn, dust off the lawn chairs, put on your plaid shorts, and enjoy the "unofficial" start of Summer!

Cook-out Menu
*While we were able to get some local veggies and herbs, we're just a bit out of season for all of them. Our local farmer markets and grocery stores are great for local fruits and vegetables... when in season. 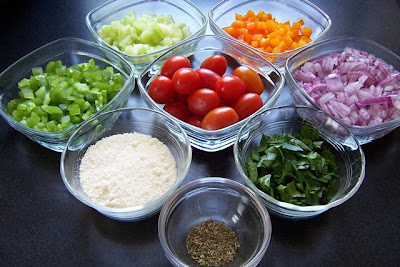 1. In a large mixing bowl, combine everything, except the dressing. 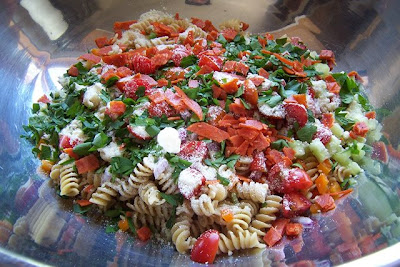 2. Mix in 2 Tbsp. of dressing and check coverage. You’ll want to just coat everything, but not drown it. Add additional dressing, if needed. 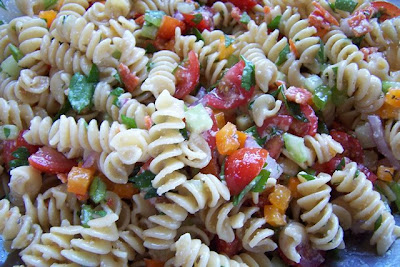 3. Move to a suitable bowl, cover and refrigerate. This is best when allowed to mellow in the fridge for a few hours prior to serving.

1. Place the diced potatoes in a large pot, and cover with cold water. Add about 1 Tbsp. of kosher salt, and bring to a boil over high heat. Once the water boils, let the potatoes cook for about 15 minutes, checking for doneness after 10 minutes. Potatoes should keep the shape, and not be mushy. When done, drain and let the potatoes cool in a large mixing bowl. 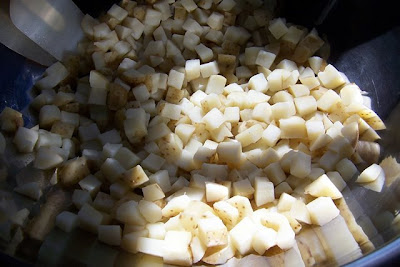 2. Combine the dressing ingredients in a small bowl. Set aside.

3. Combine the remaining ingredients in the large mixing bowl, and stir in the dressing

4. Move to a suitable bowl, cover and refrigerate to allow the flavors to mellow for a few hours prior to serving. 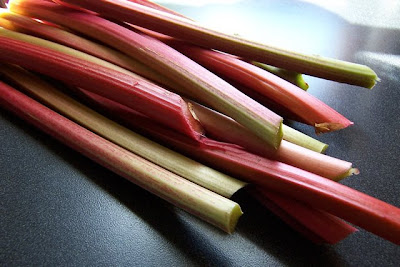 ** Due to the short baking time of a tart over a pie, I was concerned with how well the rhubarb would soften in the oven, so I decided to blanche the rhubarb for a few seconds in a pot of boiling water, and then quickly into an ice bath to cool. Peeling the rhubarb also helps. Oh, and did I mention the rhubarb is from our garden?

2. Place rhubarb in a small bowl and sprinkle with the half of the sugar and the tapioca. If the rhubarb is particularly tart, go ahead and add the rest of the sugar. Let rest while the oven warms and the pie crust is prepped. This will draw some water out of the rhubarb. 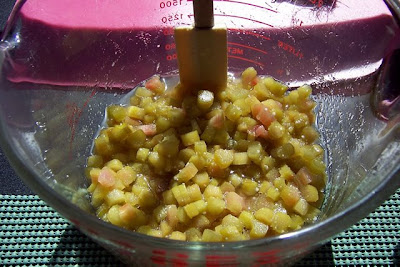 3. Cover a baking sheet with parchment. (Tip: a few shots of cooking spray will help hold the parchment in place on the baking sheet.)

4. Carefully roll out the pie crust onto the parchment, and repair any tears or holes.

5. Spoon the half the rhubarb onto the center of the pie crust, leaving about a two inch border from the edge. Sprinkle with a bit of sugar, cinnamon, and a few grates of fresh nutmeg. Repeat with the rest of the rhubarb, and a bit more sugar, cinnamon and nutmeg. 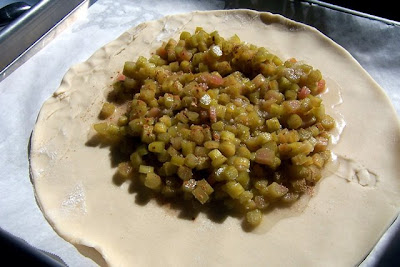 6. Carefully start forming the pie crust into a tart around the rhubarb by folding and overlapping the edge. Brush the folded crust with the melted butter, and lightly sprinkle on a bit of sugar and cinnamon. 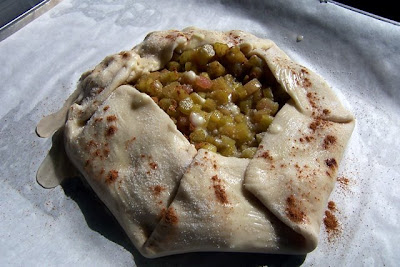 7. Place on the center rack of your 400 degree oven, and bake for 35-40 minutes, but start watching it after 25 minutes, until it is golden brown and delicious. 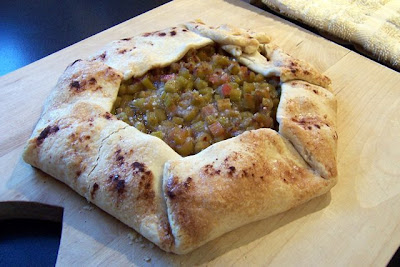 8. Remove from oven and cool before serving. Garnish with local honey and whipped cream (please, make your own if you have the time… from local heavy cream, or course!) 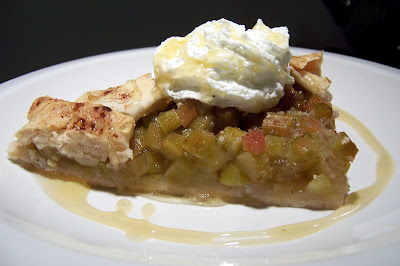 All that's left to do is grill up the white hots (you DO have enough propane, right? Go here and check.), serve up the salads, crack open a beer, and enjoy.... Ahhhh..... That's the taste of Summer... 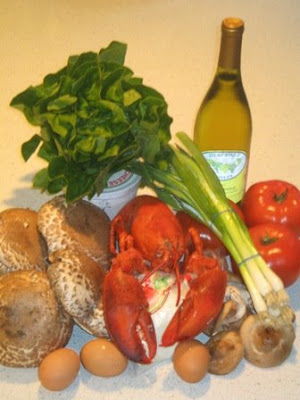 After last month’s grueling globe-trotting adventure, I was relieved to find out that the ingredients for this challenge were all within range of public transportation or bicycle. 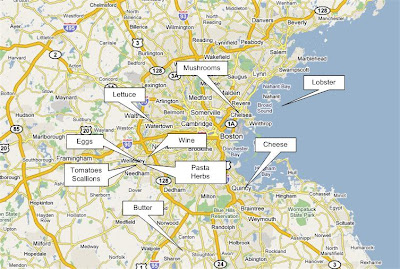 We started our search for local delicacies in Wonderland:

The Mock Turtle sighed deeply, and drew the back of one flapper across his eyes.
He looked at Alice and tried to speak, but, for a minute or two, sobs choked his voice.
“Same as if he had a bone in his throat," said the Gryphon;
and it set to work shaking him and punching him in the back.
At last the Mock Turtle recovered his voice,
and, with tears running down his cheeks, he went on again:
“You may not have lived much under the sea—”
("I haven’t,” said Alice)—
"and perhaps you were never even introduced to a lobster—"
(Alice began to say, “I once tasted—” but checked herself hastily, and said, “No, never”)
“—so you can have no idea what a delightful thing a Lobster-Quadrille is!”

And delightful they are. However, unlike the Mock Tortoise, we don’t dance with our lobsters, we eat them. Just across the street from Wonderland (the last ‘T’ stop on the Blue line) is Revere Beach, where you can look out over Massachusetts Bay and see the lobster boats hauling their catch back to the docks. We bought three frisky crustaceans at a nearby fish market.

From Wonderland, we headed to nearby Chelsea, where good things were growing at Mario Cutone’s place.

"Woke up, it was a Chelsea morning, and the first thing that I saw
Was the sun through yellow curtains, and a rainbow on the wall”
Joni obviously wasn’t referring to a morning at the Cutone Mushroom ranch where they keep them all in the dark and feed them shitake-chow. Nevertheless, the Portobellos and shitakes there grow plump and flavorful.

Next, we went in search of cheese.

MOUSEBENDER: In a nutshell. And I thought to myself, 'a little fermented curd will do the trick'. So I curtailed my Walpoling activities, sallied forth, and infiltrated your place of purveyance to negotiate the vending of some cheesy comestibles.

MOUSEBENDER: I want to buy some cheese.

At Russo’s Farmstand in Watertown (where they actually do sell cheese) we found fresh Mozzarella and Ricotta made in Quincy from local milk. We found some butter from the Crescent Ridge dairy in Sharon, and some hot-house grown Boston lettuce too.

By this time, we had worked up a locavoracious appetite. 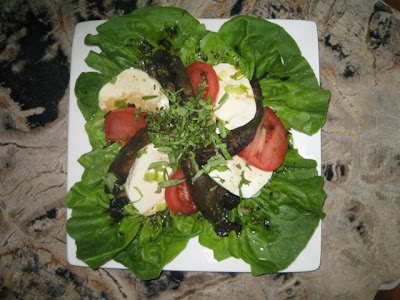 Clean the mushrooms and cut into 1/2” slices. Place in a bowl with some olive oil, balsamic vinegar and sliced scallions to marinate for several hours. Toss occasionally to mix, being careful not to break up the mushroom slices.

Slice the Mozzerella into 3/8” slices. Place in a bowl with a little olive oil and white wine vinegar and some thinly sliced scallions. Marinate for several hours.

Grill the Portobello slices for a minute or two on each side.

Slice the tomatoes and arrange the Portobello, mozzarella and tomato slices over a bed of lettuce.
Add dressing (below) and top with the basil leaf chiffonade.

Grind the seeds and salt.

Blend the liquids and ground spices.

Stir in the basil leaves 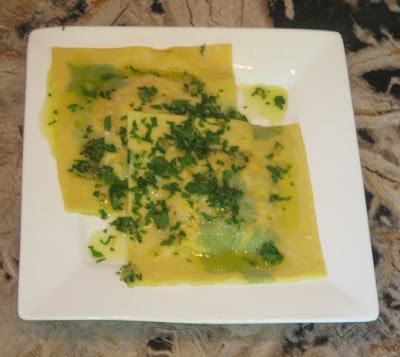 Our Lobster Quadrilles are giant square parsley-pasta ravioli stuffed with lobster claws and mushrooms. This recipe is enough to make 6 Quadrilles - enough for 3 people.

Saute the garlic and mushrooms in the olive oil until they are soft.Mix all the ingredients in a bowl and set aside.

Sort through the parsley and pick out a few dozen nicely shaped leaves.

Using a pasta machine, roll the dough out to the second-thinnest setting (#6 on Atlas style machines).

Lay out half the dough and arrange the parsley leaves on it. 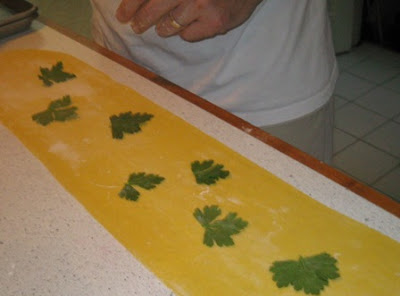 Cover with the other half and press firmly to seal. Then roll the dough once again to the second-thinnest setting. The parsley leaves will be visible through the dough. 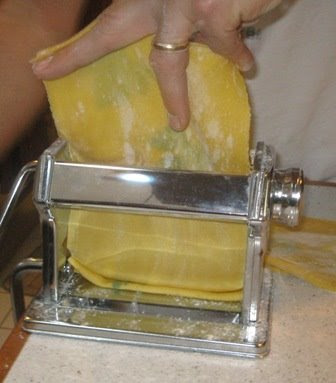 Assembly can be done on any flat floured surface, but a simple mold will make forming the lobster quadrilles easier. Mine is just a piece of pine board with a 3 1/2” x 3 1/2” x 1/4” chiseled recess. 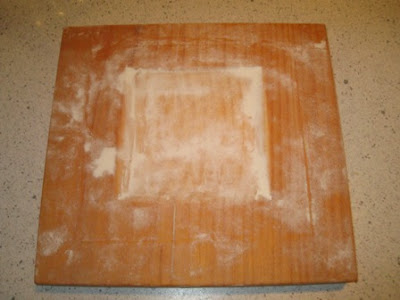 The dough should be in one or more strips approximately 5 1/2” wide. Cut the dough into 5 1/2” squares. Lay one square of dough on a floured surface. 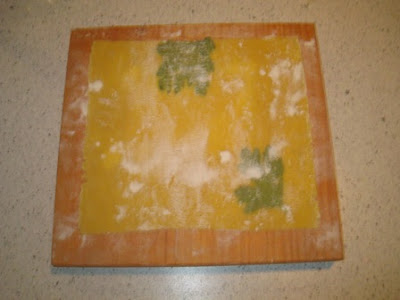 Put a generous scoop of filling in the center and spread it to about 1” from the edges. 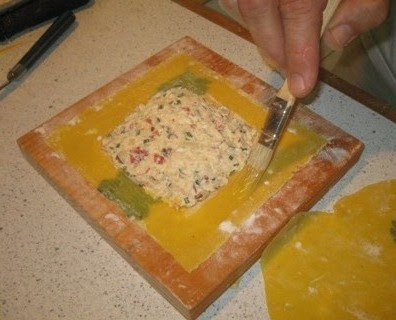 The filling should be about 1/2” thick at the center. Brush the edge will a little of the beaten egg and place another square over it. Squeeze out any air and seal well around the edges. 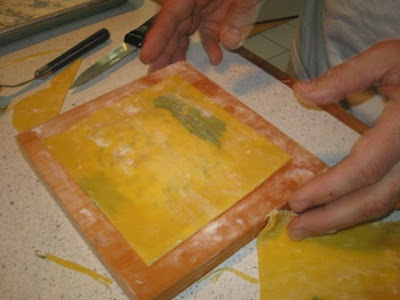 Ravioli this size can break apart easily, so handle with care. Gently lower them into boiling water, one at a time. Cook in small batches for 3-4 minutes, or until they float to the top. Carefully remove from the water with a strainer and drain.

Saute the garlic in the oil until soft and translucent. Lower the heat and add the butter. Remove from heat when the butter is melted and stir in the parsley.
Posted by Bill at 8:58 PM 2 comments:

Last month the challenge had us combing Gondwanaland for our ingredients. This month, we make it local. Very local. Our two challengers will select ingredients predominately from their own backyard to prepare their dishes.

Rules:
1. Create a dish which focuses on using ingredients raised/grown/baked/brewed/
picked/created within 50 miles of your home.
2. Prepare, plate, photograph & post by midnight on Tuesday.