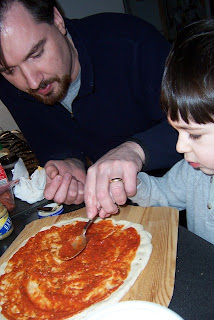 It never ceases to amaze me how powerfully the senses of taste and smell are connected to our memories. I think that must be why we turn to favorite recipes from childhood - especially around the holidays - those little mouthfuls of memories that take us back to the magic of the season as it was when we were young.

Matt's pretzels from yesterday's post were more than just a tasty treat last holiday season, they were a special memory for me. It was not exactly a holiday memory - but these big puffy soft hot pretzels brought back memories of my own childhood attempt at pretzels, straight out of Cricket Magazine - of which I was an avid reader. I still have them all - from Volume I Issue I on up for about 5 years. I am saving them to share with the Munchkin when he is old enough - and I hope that he finds as much enjoyment in them as I did.

In the meantime, we are starting to share the kitchen with the Munchkin, giving him more and more of a role in "helping" as we cook, create, and consume, starting to build his own Tastebud Memories.

I wonder, when he grows, what taste or smell will bring him back to his childhood? I am sure it won't be the same as mine, or Matt's or Bobby's.

What is your tastebud memory?
Posted by Regina at 6:00 AM