ooo, someone got fancy 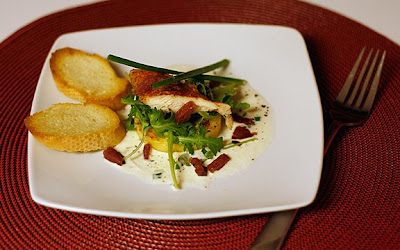 So I did this mostly to play around with creating a fancy looking dish you might get at a restaurant. Turns out, it was really tasty, too. I didn't take many... err... any pictures of the assembly process, so here's the end result, followed by a description of what went down.

The base is a parmesan cream sauce. I sautéed a shallot in olive oil, then added approximately 1 1/2 c. heavy whipping cream. After simmering for about 10 minutes, I added roughly 1/2 c. grated parmesan, along with 2 T. or so of chopped chives and a bit of salt and ground pepper.

Meanwhile, prepare some baked chicken strips in the oven. I seasoned mine with cajun seasoning and a bit of paprika and ground pepper.

I picked up some really fantastic dry Italian sausage a couple weeks ago -- it's basically a mini-salami. I diced up a bit of this and threw it on a hot grill pan. Once the fat had rendered off a bit, I took it off and set it aside, then grilled slices of polenta in the sausage fat.

I also created a red sauce using reconstituted ancho chiles, a tomato, some oil & vinegar, and some spices such as cumin, chili powder, garlic powder and salt.

Puddle of cream sauce, grilled polenta in the center. Pile of baby arugula on top of that, then half of a chicken finger sitting on the arugula. Drizzle with a bit of the red sauce, sprinkle with sausage pieces, garnish with chives and toasted french bread. 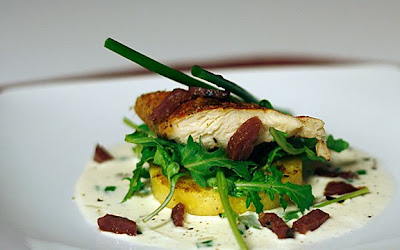 Obviously, this is not nearly enough food for a normal person... get seconds!
Posted by bobbyc at 8:09 PM

Matthew and I played "Chopped" last weekend. You should take suggestions or get Shelly to pick 5 ingredients for you to pull together into a meal, then post.

It turned out really tasty. I was going mostly for aesthetics, but the flavors balanced really nice.